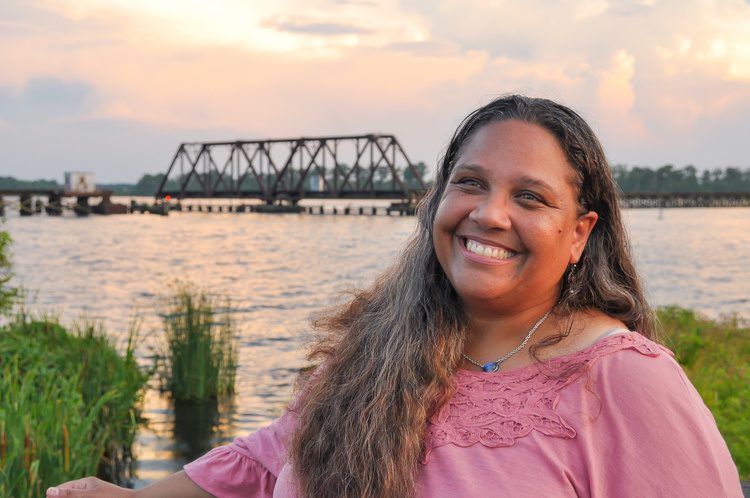 Amber Flora Thomas will be the Featured Poet at the Nexus Poet’s Poetry Open Mic at 7:00 pm, Tuesday, October 2nd at the Harrison Center, 311 Middle Street in New Bern.

Born and raised in northern California, poet Amber Flora Thomas earned a BA at Humboldt State University and an MFA at Washington University in St. Louis. Her lyric poems often engage the body as a record of loss and accrual. She is the author of Red Channel in the Rupture (2018), The Rabbits Could Sing (2012), and the Eye of Water (2005), which won the Cave Canem Poetry Prize. Her work has appeared in several anthologies, including Black Nature: Four Centuries of African American Nature Poetry (2009) and Gathering Ground: A Reader Celebrating Cave Canem’s First Decade (2006).

Red Channel in the Rupture is described as a gathering place for the troubling abuses of the past. Looking through the lens of the present moment, Thomas shows us the open palm necessary to embrace change, as she finds beauty in bodies trapped, and crushed into change. Images and experiences bleed together as we confront with the poet the animal of loss and death. Moving through the aperture of landscapes and moments that have defined this poet, we discover the rupturing territory of time and change. We recover absolution for what has tried to kill our very souls.

Peggy Shumaker, author of Cairn said this about Thomas’s work, “Amber Flora Thomas crafts poems of essential light—via photography, via the natural world. One poem asserts, I was low with ruptures I’d lived through, / regions of tear and ache. Ruptures—sexual violence, the jagged contusions of seismic grief, the obliteration of half of herself by passing. This poet knows gnawing and hunger, knows that a current / must take the shore with it eventually. Before it does, we have her poems, wild as mountain lions, hot as Santa Ana winds, delicious as ripe blackberries,wicked in fine gold hairs.”

After the Featured Poet reads, the mic is open for original poems from other poets who sign up. The Harrison Center, is located at 311 Middle Street in New Bern. This is a free event with donations requested to pay for the space. The readings are sponsored by the Nexus Poets, a group of New Bern poets promoting poetry in Eastern North Carolina.